Although this website finds its identity with this particular group name, it’s really the porthole to an amazing array of artistic talent from a couple of brothers and a group of friends who are as close as brothers over a “Period of Time”.

The two actual brothers are Paul and Bill Smith, who were raised in a family of musicians including their grandmother, uncle, and father, who played in bands all the time they grew up. Learning how to play at home and having music as the center of every family gathering, fostered a profound love of music so deep and foundational in the brothers, that almost everything else was secondary in their lives. It drew them like a magnet into the many relationships with outstanding, free spirited, super talented musicians like themselves that became the basis for these recordings.
But every member that came or went is himself a stand- alone artist with exceptional talent. They are like streamlets of water that course through the forest, sometimes joining others to form a river, and then splitting off again to run its own path.

The first of these groups to form that is represented here was “The Shadows”. In it were the Smith brothers and some of their high school friends. They weren’t just your typical high school band, however. Through their manager, they played all over California, Oregon, and Washington in night clubs and on stage. They were openers for big names of the day, and the video was actually made as part their first prize for talent in Oregon their senior year; More about that in their individual biographies.

Next, Bill was stationed San Diego and after his discharge from the Marines, he chose to stay and go to San Diego State. Paul moved down to the area to play music with Bill. Then, Paul went to visit a high school friend, Al Yates , who introduced him to a friend of his who played “a super-hot banjo”. This was Michael Wendling. Michael, Bill, and Paul got together and played music at McDini’s, becoming closer than ever.

When Michael was discharged from the Marine Corps, Paul followed he and Al Yates back to Michael’s home state, Idaho, to continue the magic. There, they met up with the youngest winner ever of the Weiser Fiddle Contest, a hot country fiddle player named Teddy Jones. Michael, Paul, Teddy, and Al then formed “Whitewater”. Whitewater played lightening-fast bluegrass music, along with many original scores written by all the members of the band. They were extremely popular on college campuses, and played a wide range of venues throughout the northwest. The “Springtime in the White Clouds” album was recorded in 1972. It was also during this period of time, that they met Tony Taylor, a wild Montana cowboy who wrote like the wind. Many of his creations and poems are to be found put to music in the collection of their work.
The fast pace of “Whitewater” was impossible to maintain, and so after 2 ½ years Paul and Michael decided to leave the group and play together for the ski resort and night club crowd. Occasionally they would play in Medford, Oregon, which is where Bill had moved to when he finished school. Bill would play with them whenever they came to Oregon. When Michael and Paul were offered to start up a brand new night club on the main island of Hawaii, Bill couldn’t resist a jig in Hawaii, he quit his job and joined them. Then the group returned to Santa Cruz, California, and it was there that a club owner finally suggested that they find a more creative name than Paul, Bill and Michael. Being proud of their Idaho ties and more specifically, their mountain roots, they decided to name the group after our dog, “Boulder”, who was named after a mountain chain of craggy 10,000-11,000 ft. peaks in central Idaho, not far from where Paul and Michael called home. Bill moved to Idaho the next summer to follow the music. They recorded and produced the “Period of Time” album that next year under their newly formed Sheepeater Record label.

As family life took its toll on time for music in Paul and Bill’s life, Michael decided to go his own way. He recorded and produced several records under the Sheepeater Label. Under the catalog tab, you will find all of his selections. His fine Leo Kottke-like style and expertise is unmatchable, you’ll see. 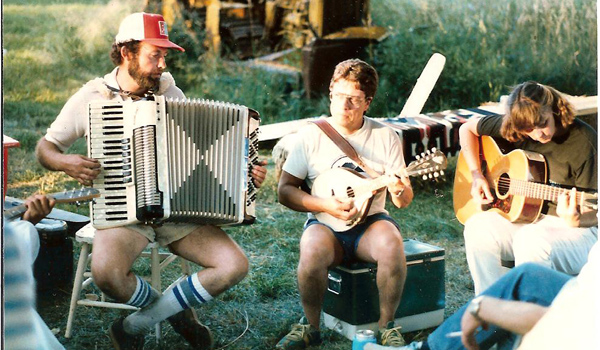 Another Michael, Michael McGonigal, joined the brothers in 1979, with his accordion and Irish bent, and Irish music has become another strong suit of the band, along with a rich variety of ‘50s rock and roll, historical ballads, sprinkling of Stan Roger’s numbers, and of course, their own original music. Ken Britton joined the group in 1980 and his velvet voice and wonderful guitar riffs add that much more depth and color to their mountain sound.
Two other members have passed away over the years and their additions are surely missed, especially Jeff Sloan, with his Irish penny whistle trills floating over the top and embellishing all the notes and his deep base voice covering that end of the spectrum with largess. And Jimmy Hanlin and his base clef bottom blending and grounding the tunes.

The Boulder Brothers is an ever fluid mix of talented friends and family who have produced some of the most amazing sounds and perceptions imaginable over the last 60 years. Welcome to the journey!